NASA’s SpaceX Crew-2 successfully returned to Earth on Nov. 9 at 03:33 UTC after undocking from the International Space Station (ISS) on Nov. 8 at 19:05 UTC. The return had been delayed a day due to bad weather but had a smooth landing despite one of four parachutes being slow to expand. Both the astronauts and the Crew Dragon spacecraft were recovered successfully from the Gulf of Mexico. 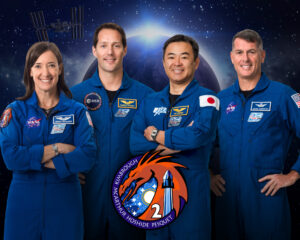 The four astronauts aboard, Akihiko Hoshide, Shane Kimbrough, Megan McArthur, and Thomas Pesquet, represent three space agencies: JAXA, NASA, and the ESA. They spent a total of 199 days in orbit – 198 on the ISS – and performed four spacewalks to upgrade the ISS’ solar panel arrays.[1] The crew also assisted with numerous experiments while aboard the station, including harvesting the first chiles grown in space.

This was the second of NASA’s contracted Commercial Crew flights with SpaceX. The Crew Dragon capsule Endeavour was reused from the Demo-2 mission, which was the first SpaceX Crew launch with astronauts aboard.[2] Both Crew Dragon capsules that have delivered astronauts to the ISS have been successfully launched and recovered multiple times – highlighting the capabilities of SpaceX’s reusable design. 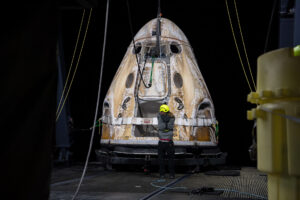 The Endeavour capsule also made a 360-degree maneuver around the ISS before departing back to Earth. The ability to perform a flyaround was a requirement set by NASA for the Commercial Crew program, and it allowed for the Crew-2 astronauts to photograph the exterior of the ISS. While Soyuz spacecraft have performed partial flyarounds, this was the first complete maneuver since the space shuttle was retired in 2011.[3]

The next NASA commercial crew mission, SpaceX Crew-3, has faced launch delays due to medical and weather issues. The mission is set to launch Nov. 11 at 02:03 UTC and will bring four more astronauts from NASA and the ESA to the ISS.