The NASA asteroid researching mission “Lucy” —selected by NASA in December 2016 — launched Oct. 16, 2021 at 5:34am ET from Cape Canaveral, Florida.  The space probe is currently on a 12-year long mission and will be performing multiple gravity assisted boosts (see image) in the following years to gain enough momentum to follow its projected trajectory to gain access to the two Lagrange points associated with Jupiter. These Lagrange points house swarms of Trojan asteroids that may hold a wealth of information for scientists exploring the origins of our solar system.  The reason being is because these Trojan asteroids are mostly unstudied, being able to take a close look at the composition, age, and diversity of the asteroids will give scientists further insights to the makeup and origins of the mechanics behind the evolution of our solar system. 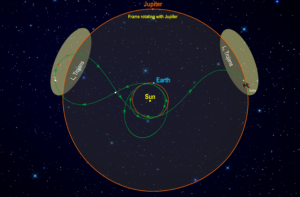 During this journey it will encounter six asteroid locations: the first being the aptly named “Donald Johanson” — The paleoanthropologist that in 1974 discovered the most complete and oldest hominin fossil which he named Lucy— asteroid in the Main Asteroid Belt that separates the four rocky planets from the gas giants.  The next stop on its journey is the Lagrange-four Trojan asteroid swarm where it will fly-by four separate asteroids and collect data using its on board sensors. It will cross back by Earth for its journey to the Lagrange-five Trojan asteroid swarm where it will finally fly-by a binary asteroid system where its mission officially ends.

The probe is considered to be in a pretty stable orbit as long as its onboard fuel reserves last and may be green lighted to perform future missions.  This also resulted in the NASA agency to put a time capsule on board in the hopes one day it will be recovered and show what life was like in the 21st century.