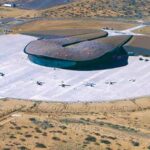 Spaceport upgrades and new spaceport development are at an all-time high, with 40 active launch sites around the globe, 10 more in development in the United States, Sweden, Australia and Canada, and 13 more proposed in eight countries. . .